The Methodist Children’s Home is getting ready a history gallery which will be dedicated next year. The gallery focuses on the life and events related to its founders, Mr and Mrs. John Pilley.

A special exhibit will be Mrs. Muriel Pilley’s 1930’s wedding gown and its complementary undergarments. It is a fashionable light weight silk ensemble. Ivory was a favoured choice of colour during that era. The long, butterfly sleeved gown with an unusual flared skirt has a simple neckline. A beautiful and genteel slip or undergarment is worn under the simple but stunning gown. The wedding dress is complete with a match pair of silk underwear. Mrs. Pilley must have been the most beautiful bride any one had seen at that time in Fuzhou.

She had kept the three-piece-wedding gowns throughout her life time lovingly and now it will have pride of place in the history gallery of the Methodist Children’s Home, Sibu.

Born in Fuzhou
Mrs. Pilley (Muriel Caldwell Pilley, 1907-2002) was born in Fuzhou on November 1, 1907, and received primary and secondary education in Fuzhou and Shanghai. Her parents, Mr. & Mrs. Caldwell and Pilley’s parents were missionaries in China. Mrs. Pilley went back to the United States to finish her tertiary education. She taught in Shanghai American school in 1931 met and married Mr. Pilley. They were married in St. John’s Church, Fuzhou and went to Fuqing for their honeymoon. Subsequently they taught in Fuzhou for many years.

All their three children were born in China. Their eldest son Robin was born in 1939, later they went to the United States to further their studies. In 1940 they returned to teach in Fuzhou. In 1941, Gail, the elder girl, was born in Yangkow. In 1947, the second daughter Marilyn was born in Fuzhou.

In 1949, the Communists took over China and forbade foreign missionaries in China, the Pilleys were advised to come to Sibu and they were told Sibu was the “New Fuzhou”. In 1952, Mr. Pilley became the Principal of Methodist Secondary School and set up the Methodist Night School.

In 1950, seeing some Sibu girls were abused by their stepmothers, Mrs. Pilley, moved in love, brought the matter to the attention of the Sibu District Officer who instead asked her to assist these girls. As a result, Mrs. Pilley arranged for three or four girls to reside in the Methodist Girls’ Hostel. The Sibu Methodist Children’s Home’s hostel building was officially opened in September 8, 1951. Ngu Xiong King (Mrs Rev Lin Wen Tsung) was the first Superintendent. This first orphanage in Sarawak was named “Methodist Children’s Home”.

From 1953 to 1957, Mr. Pilley set up the Methodist Kindergarten, the Anglo-Chinese School and the rebuilding of Methodist Town Church in Sarikei. In 1958, he returned to the United States for furlough and later returned to become Principal of Sibu Methodist Secondary School. He passed away at the age of 53, in 1959, after a heart attack. Many believed that he was thoroughly overworked in the mission field. He was buried in the Methodist Cemetery, Sungai Merah.

After her husband passed away Mrs. Pilley returned to the United States in 1961 and taught at Belmont College in Nashville, Tennessee. She retired in 1972 at the age of 65. She returned to Fuzhou to find her roots in October 18, 1989 and found that despite the turmoil during Cultural Revolution and severe persecution of the churches, the Christian population increased and was more than that in 1949.

Buried with Mr. Pilley
in Sibu
Mrs. Pilley returned to Sibu three times before she passed away in 2002. As early as 1996, she made her wish that she would like her ashes to be brought back to Sibu to be buried with Mr. Pilley. Her eldest daughter brought back her ashes in Jun 25, four years after she passed away in 2002. After the memorial service in Wesley Methodist Church, she buried her mother’s ash at the side of her father’s grave built 46 years ago. Now Mr and Mrs. John Pilley are resting together in a cemetery in New Fuzhou.

Gail Pilley is now 75. She returned to attend the 25th anniversary of the Methodist Pilley Institute, named after her parents. She handed over her mother’s wedding gown to Methodist Children’s Home, a precious artefact for exhibition in the history gallery.

During the renovation of the administration block of the Methodist Children’s Home last year, a space was allocated on the first floor for the history gallery. The history, founders and pictures of development of the Children’s Home will be exhibited.

In addition, in September 7 this year, a beautiful true to scale model of the second block of Methodist Children’s Home (formerly called Grace Hall) was completed and moved into the history gallery. This is the third model house completed by craftsman Hii Kai Yung. Mr Tiong Chiong Hong also helped to slice thin belian planks and tiles for the making of the model.

The Children’s Home also asked Hii to construct another scale model for the first building of the Children’s Home. Upon expected completion early next year it will also be exhibited in the history gallery.
Reported by Menglei
Translated by KT Chew 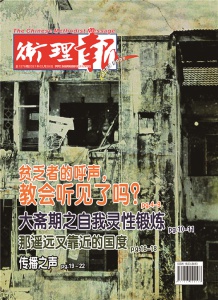