Miss Emma Palm or Pang Shu Gu, was sent by The Woman’s Foreign Missionary Society of the Methodist Episcopal Church America to Xian You, Heng Hua (now known as Putian), Fujian in 1923 as a medical missionary.

She was a nurse serving at the Xian You Methodist Women Medical Centre (present Xian You County Hospital) from 1937 where she later became the matron for almost 28 years. Miss Palm was fluent in the Heng Hua dialect. When the Communist took over China in 1950, missionaries were forced to leave the country, although she would rather stay on. However she was posted with Miss Blanche Apple and others, to serve in the Malaysia Annual Conference.

In 1952, Emma was posted to workat Sg. Teku Tien Sik Methodist church to help with the Youth and Women’s ministries. As a nurse she believed that it was very inconvenient for the sick to travel to Sibu, as Sg. Teku was 10 km from the town. Thus she felt there was a need to set up a clinic at Sg. Teku.

The government favoured Emma’s request and wished to set up a clinic in the rural area. However as there was a shortage of manpower, she was also asked to work in the clinic. The clinic was under the supervision of the Sibu Hospital. The Sibu District Council also granted funds to aid the running of the clinic.

Establishing The First Rural Clinic In Sarawak
At first Emma used the home of Ms Tuan Ging Hua to treat the sick. As she was fluent in the Heng Hua dialect, more and more villagers came to her for help, even the Ibans from the surrounding longhouses came to seek for medical treatment. To cater for the growing needs of the community, Rev Ling Kai Cheng and the leaders of the church met to discuss building a new clinic. Mr. Teng Ah Den was asked to design the building. The total cost for building the clinic and Emma’s hostel was around $7,000. An American friend sponsored a thousand dollars and the rest was contributed by the villagers.

On completion of the building, the opening and dedication ceremony was held at 10 am on 13 June, 1952. The Acting Governor of Sarawak officiated the ceremony. The Sibu Resident and leaders of the Chinese community attended the function. The Acting Governor was delighted to officiate at the ceremony and praised the event by saying: “It is the first rural clinic in Sarawak.”

Besides using for treatment of the sick, the clinic was also used as centre for educating local folks about hygiene as many rural adults and children were suffering from anaemia owing to the lack of nutritional knowledge.

The clinic was opened three days each week from morning till night. Emma also travelled to nearby Tien Tao Methodist Church, Sg. Teku and occasionally to the longhouses to treat the sick. The first year’s report said that 4,590 people came for  treatment. She hoped that she could spend more time treating the longhouse folks and sharing the gospel with them.

Emma also said that the clinic at Sg Teku was the only medical clinic under the Sarawak Methodist Church. Besides treating the sick, she also taught Sunday school and helped the Youth Fellowship at Tien Sik Methodist church.

In September 1953, Emma returned to America on holidays. The clinic was assisted by Kong Ting Yii. The clinic opened on Mondays, Thursdays and Saturdays. After the Sunday service, many patients would come to the clinic to collect medicine. There were 3,283 patients in 1954. A token of twenty cents was collected from each patient for the treatment and medicine. Many villagers were more interested in injections than oral medications as they lacked confidence in oral medications. The clinic collected the supply from the government hospital every week.

Delivering babies was another task of the clinic. The road conditions were bad and travelling became more difficult when it rained or when Emma had to answer the call for help, late at night!! However Emma often tried her best to arrive in time at the homes of the expecting mothers to deliver babies. She would visit the mothers on every alternate day and bathe the babies until the umbilical cords “dropped off”. On Wednesday nights, smallpox and other vaccinations were given free to children. The government provided the supplies.

Expanding the Service to the Longhouses
Emma returned from her vacation in September 1954. The 1955 Annual Conference report showed that 6,500 people had come to the clinic for treatment and that included treatment and advice for pre and post natal care. Her team had done more than 200 visits to families of new born babies advising and teaching, and that included visits to the adjacent longhouses as well. Sometimes, the Ibans had to walk for three hours to come to the clinic.

In 1956, the staff of the clinic had twice travelled by boat to Pasai Siong to visit and provide medical treatment. The journey would take six hours and they had to stay there for three nights. Joshua Bunsu, a theological student, joined them on the first trip and preached to the people there.

On 1 August, 1956, Miss Kong Ting Yii, the nurse of Sg. Teku Clinic was posted to Nanga Mujong, Kapit and set up the “Nanga Mujong Clinic”.  That was the first medical institution that the Sarawak Methodist Church set up in the Iban area. Miss Tiong Gin Ting was later employed to be in charge of the delivery ward of the Sg Teku Clinic. 8,670 patients turned up for treatment that year.

In 1957, there were 6,841 patients. In October, Mrs. Ding Lik Kiu and Miss Du provided consultation for a brief period of time and that was the first time that the clinic had a doctor to serve the people.

By 1958, the medical staff would make rounds to different longhouses at Pasai every month. Each trip would take five days. The people of Pasai also built a place to serve as a clinic. Pastor Philemon Sirait and Pastor Men Jon would travel with the medical team to evangelize to the people. Up to that year, 250 Ibans were baptised. The medical team also went to Sg Assan and Penasu. The daughter of Dr Harold N. Brewster, Betty Brewster and a mid-wife Ling Mee Ing joined the medical team that year.

A Strong Force in mission work
Considering that Miss Blanche Apple,was the first woman missionary sent by Woman’s Foreign Missionary Society (WFMS) to Sarawak since 1950, it is necessary that we briefly introduce WFMS.

On 23 March 1869, eight Methodist sisters from Boston, Massachusetts set up an organization aiming to send women missionaries abroad. When Mrs William Butler and Mrs Edwin Parker, wives of two missionaries, returned for holiday from India, Mrs William Butler shared with the eight sisters that the women in India had urgent physical and spiritual needs. The male Indian doctors were forbidden to treat Indian women and girls were not allowed to go to school. So there was a call for American single women to serve in education and medical field.

In the following week, the eight Methodist sisters drafted the constitution to set up a mission society. In November they collected some funds and sent Isabella Thoburn (an educationalist) and Dr. Clara Swain, to work in India. Subsequently the Missionary Society sent countless women missionaries to various parts of the world, especially in the fields of medical and education. Hundreds of brave women missionaries were sent to Africa, India, China and other countries. In 1970 the Missionary Society was renamed “The Women’s Divisional of the General Board of Global Ministries”.

In January 1951, the Sarawak Methodist
Church also set up the Woman’s Division of Christian Service (WDCS) under the Board of Missions. In 1952, Miss Blanche Apple was officially sent to Sibu to work in this women ministry.

28 Years in China and 8 years in Sibu
By 13 July 1959, Emma had served eight years in Sibu (after 28 years in Heng Hua, China), she retired and moved back to America. Her post was taken up by a Danish missionary, Miss Alma Eriksen who reported, “Miss Palm was well loved and respected by the people. Many people missed her badly when she left.”

(note: The record written in the “The 75th Anniversary Magazine of Sarawak Methodist Church” which said that Emma retired in 1955 could be an error. ) 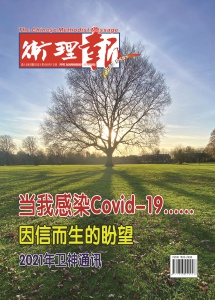 多回应邀来砂演讲，
新加坡前三一神学院院长钟志邦博士于2021年6月12日中年12.15pm安息主怀。砂拉越卫理公会特致輓词悼念。以下为钟志邦博士丧礼三天聚会的链接：
Hi, here are the links for the 3 days: