Well into the fourth week of the Movement Control Order (a partial nationwide lockdown to slow or break the chain of COVID-19 transmission) in Malaysia, a variety of social behaviours among Malaysians have emerged. Most of us are compliant, and stayed home. Infrequently going out to only procure food and essential supplies. Some have boldly defied the movement restriction, venturing out at night, only to be apprehended and charged. At police roadblocks, most people were calm and polite to the officers while others were irate and rude. A stubborn few did go out to jog in the parks, and was arrested. Groups of people were even caught having gatherings at various places, including religious institutions. All these amid the rising number of infected cases and death toll from day to day.

Psychologically, many are calm, pragmatic, and not stressed by the crisis. However, there are those of us who are not so relaxed. We tracked the daily national and global rise in number of cases and death toll, and panicked. We become obsessed with signs and symptoms – measuring body temperature every hour of the day.

Within the Christian community, some of us questioned God, and suspected this as a punishment from Him. Many were quick to blame the increasingly unchristian world as the cause, that it is a result of God’s anger and wrath on the disobedient and evil world. Admittedly, I too fall into this group of finger-pointers. Choosing not to accept and understand the situation at a deeper spiritual level, I found it convenient to blame and condemn others. Well, not until I read the first chapter of the Book of Jonah one night before going to bed. Something persistent and strong urged me to think deeper.

We know the Jonah story only too well. A prophet tasked by God to reprimand the people of Nineveh, he instead, disobeyed and ran away. But, God brought him back in miraculous ways, so that he can useful again. This is retold countless of times to all of us, from every Sunday school children to churchgoing adult. However, when I reading the Book of Jonah, an added perspective to the narrative emerged.

Chapter one describes Jonah’s defiance and unsuccessful escape. It is not the futility of his action that carries the only message here. If we take a closer look, we would notice that none of the sailors in the ship that Jonah travelled with were believers. In fact, it was clearly stated that when the terrifying storm came, the sailors were calling to their respective gods for help. They weren’t praying to the one true God – Jonah’s God, our God. When the storm worsened, they feared for their lives and did what anyone would do. They threw the cargo into the sea. This is a normal reactions by human during calamities – resorting to practical common sense when spiritual solution fails. For these sailors, their gods did not help them. Fearful and desperate, the captain shouted for Jonah to call to his God. Tension was at breaking point, and so they sought a scapegoat. They casted lots to see who was responsible for the tragedy that befell them. The fairness in this casting of lots is questionable. The only one who was not praying or doing anything was Jonah. Instead, he was in a deep sleep throughout the ordeal. Therefore, it was quite easy to point the finger at him.

When he woke up, Jonah was interrogated. He confessed to them what he had done. Most importantly, he also told them about God – the one true God of heaven who made the sea and land. Now, an important and immediate consequence followed this. All the ship’s crews were terrified. Despite being non-believers, they believed that Jonah’s God created the storm, and could also stop it. Imagine today if I openly tell everyone about Christ as the one true God during this crisis time. I could be mocked and ridiculed. Atheists would refute me saying that there is no God. People of other religions would be wary, and accuse me of attempting to convert them. Many others would also be angry that I brought up the issue of religion at a time like this. In a world that has drifted away from Christ, talking about Him openly can become a social liability. It can even land me in jail.

But in Jonah’s circumstances, the situation was different. Instead of ridiculing or refuting Jonah, the sailors demanded to know what they could do to him in order for God to be appeased, and the ordeal to end. However, they didn’t have the heart to follow Jonah’s instruction, that was to throw him overboard. They tried with all their might to row back to shore albeit a futile effort. Finally, with much reluctance they threw Jonah into the sea. They were greatly distraught by this, and cried out to God for mercy. Amazingly, they offered sacrifice and made vows to God! It was never mentioned whether they eventually became true believers. But, people do not usually offer sacrifice and made vows to other gods. For them to do so, was a big deal. Would a Muslim, Buddhist, or Hindu openly pray and made vows to Christ in today’s world? Did God use the situation to change the sailors to become believers? I believe so, and God only needed Jonah to tell them that He is the true God who is the creator of the world.

Now, of course, we all know that Jonah did not drown and die. God had a big fish to swallow him up. The rest of what happened is continued in chapter two, but I am not going into that. Instead, let’s dwell on what happened in the first chapter, and reflect upon the current crisis that we are in now. I would, indeed, equate the COVID-19 pandemic to a violent storm that has shook everyone in the world to their core. It has put many of us in a state of desperation and fear. Aren’t these the same predicament as those crew in the ship with Jonah? People of other faiths are praying to their gods now. Medical experts and scientists are working tirelessly to find a drug and a vaccine. World leaders have ordered lockdowns and various forms of restricted movement in their respective countries. And, like those sailors in Jonah’s time, nations pointed fingers at one another, looking for scapegoats. Even in our own communities, some have been blaming those would are linked to certain infection clusters.

This big question now is, what are we, Christians doing at times like this? This could be a time when God is changing the world to make everyone a believer. Can we follow Jonah? Defiant but still faithful in witnessing for Him. Besides staying home, how much time and effort do we spend spreading the gospel to others via social media? Or, do we just spread fear and false news? Instead of pointing fingers and blaming others, do we see ourselves as greatly to be blamed? If God is punishing this world with a pandemic, could it be that we, Christians, have been disloyal and disobedient to Him? Jonah’s action of running away from God, and disobeying His instruction to fulfil the task set before him was the cause of the violent storm. We should pay close attention to this, and reflect upon ourselves. In many Western countries, more and more people are leaving and denying Christ. In Asian countries, Christians have fallen prey to consumerism agenda. We have distorted the true nature of Christian faith by tailoring its practice and values to suit secular convenience and personal desires. If God is punishing the world now, we (Christians) are the first to be blamed. We have to repent and return to Him.

Jonah was thrown overboard so that the sailors might believe and fear in the true God. Maybe it is time for Christians to take the plunge and make the sacrifice now. We should be more zealous and bold in telling the world about Christ, and not fearing any social or legal consequences. We ought to help people of other faiths through sacrificial and selfless acts during this time. We need not hoard food and essential supplies, so much so till others don’t have enough. We should not go into the silly panic buying of rice, flour, and toilet paper. There is no reason for us buy up all the face masks until those who are sick ended up having no means to shield themselves from spreading the infection. Are we only worried about taking care of our ourselves and our family at times like this? Many of us are doing selfish things now, because of desperation and fear of the uncertainties. But, if we trust God, He will rescue us, like how He rescued Jonah.

How Christians behave during this COVID-19 pandemic crisis may determine whether the world will turn to Christ or more will leave Him. Natural catastrophes in this world usually happen for a reason. God does not allow adversities to be wasted, and only to have destructive outcomes. This is the time for Christians to come out of obscurity, to refrain from sin, to return to Christ, to be good examples, and to rise to the occasion in telling the whole world about Him. 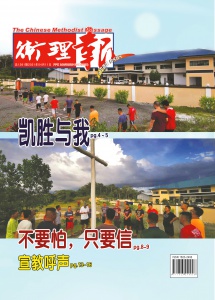